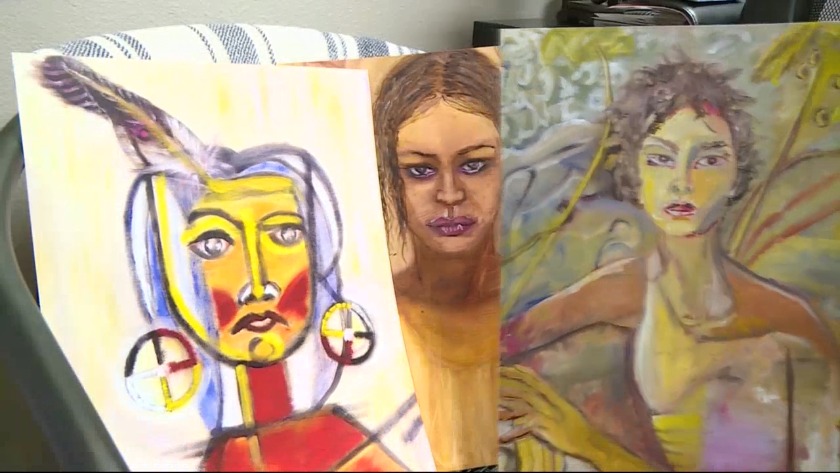 Along the Way - Artists finds home in Rapid City

RAPID CITY, S.D. (KEVN)- Sometimes the beauty of a painting goes far beyond the paint itself.
For example, one Rapid City artist, has lived in many places, but for many years has had no home at all.

Homeless artist Joel Bennett holding up one of his paintings at the Hope Center in Rapid City.

Joel Bennett was born far, far away and that experience is what's reflected in his art.

"I struggle with depression and now, kind of some health things, the pinched nerve. It's just become really hard to keep up at the pace to be able to rent a place," says artist Joel Bennett.

Bennett was born in South Africa, but he is an American citizen. It is a long way from South Africa to Rapid City, with many stops in between.

"But one of the places I went to when I was a kid was Brazil and I just, I love the Amazon. I love the jungle, the people there," Bennett says as he reflects on his memories.

He's spent a little more than half his life in the U.S., and the rest overseas. Joel is a self taught artist.

"I think it was about 8 or 9 years ago I started, and then I've had some gaps with homelessness and survival times," Bennett says.

He says he's been homeless on and off since about 2005, partially by choice. But, this time of year, it's just too doggone cold to sleep outside.

"I don't know how people stay under bridges and stuff. I couldn't do it," he says.

When we first met Joel he was staying at the shelter,

"This is my first attempt at an underwater scene so I'm kind of learning as I go," Bennett says, as we watch him working on a painting.

Very soon after we met Joel, he had enough money to rent a motel room. In South Africa he says, his dad worked for a church related organization training interns to get involved in bridge building encounters, camps aimed at bringing different people groups together.

"Really mix people together, who had never really mixed together, people from black townships, Indian townships, white suburbs or whatever and put them all together," Joel says, explaining the goal of the bridge building encounters.

Which helps explain the type of art he hopes his brush creates.

"I kind of like to do culturally ambiguous people. Like, you can't really tell. Are they African, Chinese, Native American? Very dark Caucasian? Like, I like it to be ambiguous so that people can see beauty in everybody," he says.

Joel spent about 7 years in South Africa, 10 years in England. And in recent years here in the states, he's moved a lot too.

"Like a ping pong ball," Bennett says. "Mostly here in the U.S. the last 10 years or so. Washington, Colorado, Idaho," he says listing off states along his path of life.

For a man well traveled, there is a permanence of sorts, portrayed in painting.

"Eventually a canvas will fall apart, the paint will flake off, and end up in a dumpster but it, it kind of just gives something solid, gives me a point of reference in life," Bennett says.

He had prints of his paintings for sale at the Hope Center's, "Art for Hope" event back in November and has sold more prints since then, hoping someday painting can be his main source of income.

"One day I hope to maybe get to that level where ya know I could, 'I got a painting 500 dollars, but you know I'm not quite there yet," he tells us.

Still, painting he says, is a good escape.

"I find a lot of freedom. I'm not worrying about everything when I'm painting," Joel explains.

For this man who has seen so much, traveled so far, his art he hopes sends this simple message...

Because life, is often, about perspective.

Bennett is still living in a motel, but hoping to move into low income housing.

His dream is to someday move back to South Africa.

If you're interested in purchasing a print of one of Joel Bennett's paintings, they're available at the Hope Center in downtown Rapid City. You can call them or stop by for more information.

If you've met someone cool "Along the Way" please call us, or e-mail Steve Long at stevel@blackhillsfox.com to let us know.

Influenza B is the main flu strand circulating, especially serious for kids